Judith is the author of:

The World is One Kilometre: Greville
Street. Prahran| PMI Press 2019


Most people know Greville Street, Prahran for the groovy music venues, clothes shops and eateries that thronged the street for the last 30 years of the twentieth century. But the street’s conversion from quiet shopping centre, residential and manufacturing locality began in the 1920s when Leggett’s dance hall opened and hosted events for thousands of people until the 1960s. At the end of that decade the Monash University Labor Club moved its urban headquarters in to the street, along with the first of the ‘groovy’ shops, Alice’s Restaurant Bookshop, run by Jill Jolliffe. When the Labor Club moved out, the Feedwell Foundry moved in – it was one of Melbourne’s first whole food stores. Unique clothes, food, book, record and second hand shops moved in taking advantage of the cheap rents and the added benefit of being able to live above the shop.

In the 1970s the Station Hotel was the venue for Captain Matchbox Whoopie Band whose members lived in the street as did Chrissie Amphlett. ACDC, Cold Chisel, the Dingoes, Richard Clapton and many other bands played at the Station Hotel. By the time the Continental opened in 1992, photographer Rennie Ellis had been ‘capturing’ the street for 15 years and would continue to do so until his death. His studio was on the same corner where Marcus Clarke had lived in the 1870s after one of his many bankruptcies.

This book begins in the 1830s with a natural and geographic history of the area before European settlement. The 1837 reserve for a ‘Mission for Aborigines’ was located on land that included the future Greville Street. The speed of development after the 1840 land subdivisions and sales was breathtaking. The building of the railway, town hall, courthouse and police station in the street during the 1860s, as well a one of Melbourne’s earliest foundries, inevitably made tiny Greville Street an important location. In the 1880s the location of the railway station and civic buildings led to the construction of many terrace shop buildings.

In the late nineteenth and first half of the twentieth century, Greville was a typical inner city street going from boom to bust with its share of problems arising from bad infrastructure and poverty. The 1950s brought migrants, especially from Greece. From the 1960s to the end of the millennium the street became one of Melbourne’s key counterculture locations for music, clothes, food and lifestyle. Changing social and economic factors have affected the street in the 21st century, but the vibrancy remains.


The lavishly-illustrated, hardcover book explores the history of Acland Street since it became St Kilda’s first named street in 1842, taking its name from Thomas Dyce Acland, the owner of the schooner Lady of St Kilda which gave its name to the suburb.

The fortunes of Acland Street have ebbed and waned along with St Kilda’s. They grew rapidly during the Gold Rushes and the boom that followed, dipped in the 1890s’ depression, rose again after World War 1, fell catastrophically in the Great Depression, and started to climb again in the 1980s. It’s been home to the wealthy and the poor, to Jews escaping Nazism, and to a motley of musicians, artists, gays, sex workers and radicals. It is a place where the rich and down-and-out, respectable and disreputable, highbrow and lowbrow, have always jostled for space and dominance.

Acland Street was at the forefront of cultural innovation for much of the twentieth century. Because of its place as part of Melbourne’s centre of entertainment, and its functions, despite its short length, as a conduit between such different micro-culture as Fitzroy Street and Barkly Street, and crossed by the Esplanade and Carlisle Street, it has always been vibrant, always changing.

The Political is Personal: A Twentieth Century Memoir
| Lauranton Books 2016

‘The Political is Personal is an inspiring memoir of a life lived to the full, epic in scope, tempered by an acute political awareness, driven by a hunger for knowledge and experience, and crafted with the skill of a seasoned writer. Judy Buckrich deftly interweaves the historical and the momentary, and writes of complex matters with great clarity. The narrative carries the reader effortlessly through some of the twentieth century’s most harrowing, and significant moments—war, revolution, migration, political movements, and personal journeys are all part of the tapestry—the result is a riveting memoir that both informs and energises, and carries the reader through tumultuous times. The photos work in harmony with the text, and integrate the historical and the intimate. Buckrich is typically direct and frank in writing of her own adventurous life. The women’s movement and sexual politics take centre stage—alongside sharp observations of the challenges of the writing life.  The achievement of this book is a promise fulfilled—the personal is indeed viewed against a far bigger canvas, yet throughout, the political is always reflected in the life-story—and always achingly human.’ – Arnold Zable, Acclaimed writer, novelist and human rights advocate.

(Courtesy of The Daily Review)

The Village of Ripponlea
| Lauranton Books 2015

A well illustrated community history of  the small Melbourne suburb of Ripponlea, tracing the major features of its physical presence from Boon Wurrung lands and early European occupation to the development of its shopping strip after the opening of Ripponlea station in 1915, the significance of ‘Ripponlea’ and other mansions, Brunnings Nursery, sundry schools and the mix of art deco houses and flats.  The Village of Ripponlea also discusses its distinct demography, including Jewish and other immigrant families.

This book won the Victorian Community History Awards 2016 Small Publication Award for a limited-run publication which features Victorian local, cultural or social history – ‘a short, interesting community history set within the contexts of change in Melbourne and the impact of international events.’

The Making of Us: Rusden Drama, Media and Dance  |  Lauranton Books 2015

This is Judith Buckrich’s account of an extraordinary tertiary institution that, for a short while, provided its students with a grounding for not just a career but a life in creativity.

The story of one of Australia’s oldest sports’ clubs. The book will appeal to anyone with an interest in Melbourne’s educated upper classes, the Yarra River and rowing.

It is available through the Melbourne University Boat Club

Fabulous book about a school that became one of Australia’s great innovative art schools.

Available through the publisher at their online shop.

You can read an online article about the research involved in writing this book here in ‘Provenance: The Journal of Public Record Office Victoria’

Available in bookshops and online bookshops. 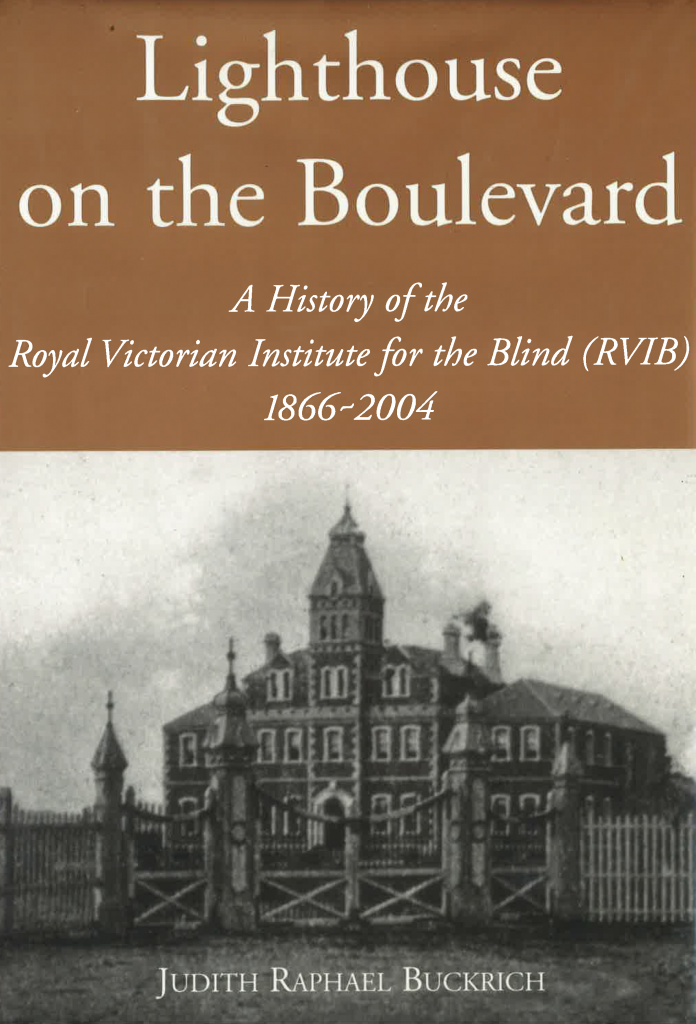 Lighthouse on the Boulevard: A History of the Royal Victorian Institute for the Blind  |  Australian Scholarly Publishing 2004

Commissioned by the Royal Victorian Institute for the Blind, a definitive history of an important Australian institution which provided assistance to blind and visually impaired people for 138 years. The RVIB is now part of Vision Australia.

Available through Vision Australia and at various online bookshops. Also available in Braille and as a Talking Book.

The Long and Perilous Journey: A History of the Port of Melbourne  |  Melbourne Books 2002

Well illustrated history of the Port. Commissioned by the Melbourne Port Corporation.

The biography of one of Australia’s great science fiction writers. Turner was for many years a writer of mainstream fiction and won the Miles Franklin award in 1962 for The Cupboard Under the Stairs. He won the Commonwealth Writer’s Prize and the 1988 Arthur C. Clarke award for The Sea and Summer, a prophetic novel about the effects of climate change. Turner was the subject of my doctoral thesis at Melbourne University.

History of the Melbourne Jewish Philanthropic Society and the Montefiore Homes. Established before the Victorian gold rush in 1848, the MJPS was one of Victoria’s first philanthropic societies. Tells the story of Melbourne’s Jewish community and reveals much about changing attitudes to philanthropy in Melbourne.

Definitive and beautifully illustrated history of Melbourne’s Champs Elysees. Photographer Antoinette Birkenbeil and I worked on this throughout 1993 to 1995.

It is now out of print and rarely available second-hand.

Theme by Anders Noren — Up ↑